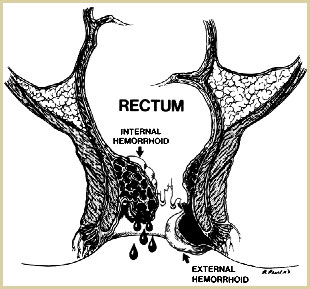 Often described as "varicose veins of the anus and rectum", hemorrhoids are enlarged, bulging blood vessels in and about the anus and lower rectum. There are two types of hemorrhoids: external and internal, which refer to their location.
External (outside) hemorrhoids develop near the anus and are covered by very sensitive skin. If a blood clot develops in one of them, a painful swelling may occur. The external hemorrhoid feels like a hard, sensitive lump. It bleeds only if it ruptures.
Internal (inside) hemorrhoids develop within the anus beneath the lining. Painless bleeding and protrusion during bowel movements are the most common symptom. However, an internal hemorrhoid can cause severe pain if it is completely "prolapsed" - protrudes from the anal opening and cannot be pushed back inside.
What causes hemorrhoids?
An exact cause is unknown; however, the upright posture of humans alone forces a great deal of pressure on the rectal veins, which sometimes causes them to bulge. Other contributing factors include:
Whatever the cause, the tissues supporting the veins stretch. As a result, the veins dilate; their walls become thin and bleed. If the stretching and pressure continue, the weakened veins protrude.
What are the symptoms?
If you notice any of the following, you could have hemorrhoids:
Do hemorrhoids lead to cancer?
No. There is no relationship between hemorrhoids and cancer. However, the symptoms of hemorrhoids, particularly bleeding, are similar to those of colorectal cancer and other diseases of the digestive system. Therefore, it is important that all symptom are investigated by a physician specially trained in treating diseases of the colon and rectum. Do not rely on over-the-counter medications or other self-treatments. See a colorectal surgeon first so your symptoms can be properly evaluated and effective treatment prescribed.
How are hemorrhoids treated?
Mild symptoms can be relieved frequently by increasing the amount of fiber (e.g., fruits, vegetables, breads and cereals) and fluids in the diet. Eliminating excessive straining reduces the pressure on hemorrhoids and helps prevent them from protruding. A sitz bath - sitting in plain warm water for about 10 minutes - can also provide some relief
With these measures, the pain and swelling of most symptomatic hemorrhoids will decrease in two to seven days, and the firm lump should recede within four to six weeks. In cases of severe, persistent pain, your physician may elect to remove the hemorrhoid containing the clot with a small incision. Performed under local anesthesia as an outpatient, this procedure generally provides relief.
Severe hemorrhoids may require special treatment, much of which can be performed on an outpatient basis.
Other treatments include cryotherapy, BICAP coagulation and direct current. Cryotherapy, popular 20 years ago, consists of freezing hemorrhoidal tissue. It is not recommended for hemorrhoids because it is very painful. BICAP and direct current are methods that shrink the hemorrhoid. None of these t reatments have gained widespread acceptance.

The image shows a rubber-band ligation. (A) Bulging, bleeding, internal hemorrhoid. (B) Rubber band applied at the base of the hemorrhoid. (C) About 7 days later, the banded hemorrhoid has fallen off leaving a small scar at its base (arrow).