Polyps of the Colon & Rectum 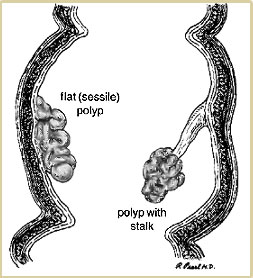 Polyps are abnormal growths rising from the lining of the large intestine (colon) and protruding into the intestinal canal (lumen). Some polyps are flat; others have a stalk.

Polyps are one of the most common conditions affecting the colon and rectum, occurring in 15-20 percent of the adult population. Although most polyps are benign, the relationship of certain polyps to cancer is well established.

What are the symptoms of polyps?
Most polyps produce no symptoms and often are found incidentally during endoscopy or x-ray of the bowel. Some polyps, however, can produce bleeding, mucous discharge, alteration in bowel function, or in rare cases, abdominal pain.
How are polyps diagnosed?
Polyps are diagnosed either by looking at the colon lining directly (colonoscopy) or by x-ray study (barium enema).
There are three types of colorectal endoscopy: (1) rigid sigmoidoscopy, (2) flexible sigmoidoscopy and (3) colonoscopy. Rigid sigmoidoscopy permits examination of the lower six to eight inches of the large intestine. In flexible sigmoidoscopy, the lower one-fourth to one-third of the colon is examined. Neither rigid nor flexible sigmoidoscopy requires medication and can be performed in the doctor's office.
Colonoscopy uses a longer flexible instrument and usually permits inspection of the entire colon. Bowel preparation is required, and sedation is often used.
The colon can also be indirectly examined using the barium enema x-ray technique. This examination uses a barium solution to coat the colon lining. X-rays are taken, and unsuspected polyps are frequently found.
Although checking the stool for microscopic blood is an important test for colon and rectal disorders, a negative test does NOT rule out the presence of polyps. The discovery of one polyp necessitates a complete colon inspection, since at least 30 percent of these patients will have additional polyps.
Do polyps need to be treated?
Since there is no fool-proof way of predicting whether or not a polyp is or will become malignant, total removal of all polyps is advised. The vast majority of polyps can be removed by snaring them with a wire loop passed through the instrument. Small polyps can be destroyed simply by touching them with a coagulating electrical current.
Most colon examinations using the flexible colonoscope, including polyp removal, can be performed on an outpatient basis with minimal discomfort. Large polyps may require more than one treatment for complete removal. Some polyps cannot be removed by instruments because of their size or position; surgery is then required.
Can polyps recur?
Once a polyp is completely removed, its recurrence is very unusual. However, the same factors that caused the polyp to form are still present. New polyps will develop in at least 30 percent of people who have previously had polyps. Patients should have regular exams by a physician specially trained to treat diseases of the colon and rectum.